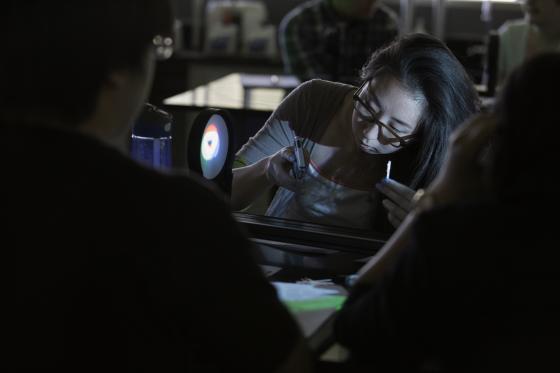 Arizona State University is part of a multi-university team awarded funding from the National Institutes of Health (NIH) devoted to encouraging students from diverse backgrounds to pursue careers in bioscience research.

The award, of nearly $31 million, is to develop new approaches that engage researchers in biomedical sciences, particularly those from underrepresented minority groups. These awards are part of a projected five-year plan  to support more than 50 awardees and partnering institutions  in establishing a national consortium to develop, implement and evaluate approaches to recruit and retain individuals in biomedical research.

According to Lourdes Echegoyen, principal investigator for the Building Infrastructure Leading to Diversity (BUILD) project, the number of successful underrepresented minority biomedical scientists is not reflective of the U.S. population. While 25 percent of the U.S. population is Black, Hispanic or Native American, less than 13 percent of students representing these groups are enrolled in STEM graduate programs, and less than 10 percent are doctoral recipients. Furthermore, while women account for 51 percent of the U.S. population, they make up only about 10 percent of all employed scientists and engineers. The goal of the multi-university project is to collectively address these disparities in order to improve the quality of training environments, broaden research priorities and develop sufficient numbers of qualified scientists.

ASU is one of 11 partner universities for the BUILD project for the Southwest region. Further demonstrating their commitment to interprofessional education, the College of Health Solutions and College of Nursing & Health Innovation at ASU will be contributing the largest number of faculty to the BUILD project as they strive to prepare students within biomedicine and health.

“We are thrilled to be a part of this multi-university, interdisciplinary project that will address a real need in the bioscience and health industries,” Alison C. Essary, ASU BUILD project lead, and director of student affairs for the college said. “We look forward to offering a progressively advanced set of programs to transform the biomedical research training of underserved populations in the Southwest with the ultimate goal of improving their competitiveness for future grant opportunities.”

Supported by the NIH Common Fund and all NIH 27 institutes and centers, 12 awards were issued as part of three initiatives of the Enhancing the Diversity of the NIH-Funded Workforce program.

For information about the BUILD, NRMN, and CEC awardees and partners, please visit http://commonfund.nih.gov/diversity/fundedresearch.

Be the first to know as we add more trainings and resources!